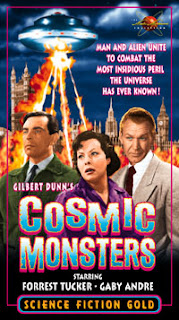 "The Strange World of Planet X" (AKA Cosmic Monsters) is a cautionary tale about scientific experimentation.  The 1958 black and white British science fiction film stars Forrest Tucker and Gaby Andre, which found a cult following through television reruns.  Plot summary at Wikipedia describes, "a monomaniacal scientist, Dr. Laird (played by Alec Mongo), has invented ultra-sensitive magnetic fields, which begin to attract objects from space. Strange things begin happening, including a freak storm, and insects and spiders begin to mutate into giant monsters. An alien spaceship has appeared over London and begins to warn mankind against the dangers of this scientific experiment."  You can enjoy 72 minutes of British retro sci-fi by just dropping below the fold!