Retro Sci-Fi Weekend: ‘This Is Not A Test’ 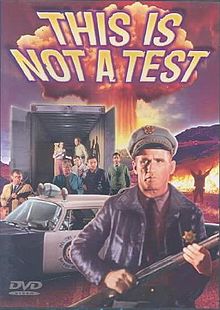 You may - if old enough - remember those empty-headed nuclear drills of the early sixties?  The present writer recalls ducking below a desk in first grade to hide head between knees, as if it would provide protection from a nuclear blast?  The thought occurs whether you'd be blown across school real estate if blast blew you through the open end of your desk or if you'd take you desk with you if it came in from the opposite direction?  Possibly, there might be a small benefit if detonation were miles away, but a head-ducking maneuver for protection still seems to offer minimal cover?  1962 Sci-Fi  flick "This Is Not A Test" reminds viewers of Cold War paranoia of that year..  It was in 1962, America trembled over the Cuban Missile Crisis, and possibly, biggest dick ever USAF  General Curtis LeMay, was model for character of Buck Turgidson in film  "Dr Strangelove" also in theaters. Seamon Glass (on DVD cover) stars - if film truly has any - playing deputy Sheriff of Del Oro County somewhere in California, presumed not far from San Francisco.  The Sheriff receives, according to Wikipedia, "... orders to block a road leading into an unidentified city...Soon, he has detained several vehicles with a variety of occupants ranging from an elderly man [Thayer Roberts] and his granddaughter [Aubrey Martin], to a man [Michael Greene] who has recently become rich and his alcoholic wife [Mary Morlas], to a trucker [Alan Austin] and a hitchhiker [Ron Starr]. The motorists and the police officer hear attack warnings over the police radio and begin to prepare for the inevitable bombing. The film focuses on the reactions to the impending attack by the motorists, and the officer's efforts to keep order. Complicating matters is the revelation that the hitchhiker is a psychotic who is wanted for murder. As the countdown to the missile attack continues, the men and women try desperately to convert a supply truck into an impromptu bomb shelter." The flick is realistic to extent lawlessness quickly takes over, as realization sinks in, people no longer have to answer to authority.

Perhaps, most surprising, Glass goes on to become a drama teacher, and ten years later, appears as a brother who drives the kayakers' vehicles down river for the city boys in Deliverance.  Roberts
got his start in vaudeville and starred with Helen Hayes on Broadway.  Greene billed as Green in this film, had a long career and was Bill Petersen's partner twenty years later in "To Live And Die In LA."  The real import of film is emergency alert more prevalent during sixties of "This Is Not A Test"