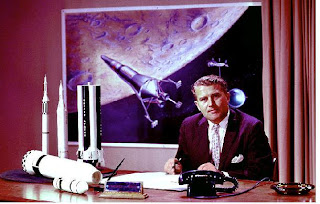 Did American space program trip unexpectedly over an anti-gravity effect of spinning rockets with Explorer I satellite? Richard C Hoagland, with the benefit of hindsight, takes a long look into rearview mirror in essay, "Von Braun's 50 Year Secret: The US Explorer I Discovery that Could Have Saved the World...". Young readers don't realize what kind of world it was in 1958, where one telephone line connected Explorer I launch mission leaders with Washington DC and there were no professional tracking stations on opposite side of the world! In the essay, Hoagland suspects Von Braun was baffled by unexpected high orbit obtained by Explorer I satellite (orbital apogee of 1592 miles compared to 1000 mile expectation).

Von Braun came to rely on, as a result, brute force Saturn V and proposed Saturn Nova booster rockets, in order, to have ability to correct course numerous times to compensate for "anomalous orbital dynamics". Hoagland wonders, also, if this was a reason if not a cause of great number of early failures? The ability to dismiss Explorer I's high orbit as a simple miscalculation, allowed real reason - an anti-gravity effect of spinning top stage - to go undetected, according to Hoagland.

An examination of early Moon misses by Luna 1 and Ranger missions are fascinating! Hoagland suspects Von Braun solved "non-Newtonian" physics problem of unpredictable trajectories quietly in 1962 when a "direct ascent"to Moon Mission was replaced by Lunar Orbit Rendevous solution. The successful impact of Moon by Ranger 4 cited as support of this view. "Was von Braun's sudden, dramatic "turn around decision" regarding LOR because, the "non-Newtonian dynamics problem" -- still standing firmly in the way of all reliable space rendezvous -- had finally, quietly, been solved?; had Ranger 4 been merely the final, visible demonstration of this in-space celestial-mechanics resolution (with the publicly-presented aspects of the mission merely a convenient “cover”)?!"

A discussion of physics behind anti-gravity effect includes the Allais effect, an electrical engineer's belief rotating objects have a neutralizing effect on gravity, and Nazi Bell torsion physics as revealed by friend and writer, Joseph Farrell. The Phoenix Lights, 2000 Southern Illinois sightings and 2008 Stephenville, TX UFO case, possibly, represent this kind of anti-gravity tech! Hoagland believes the suppression of non-Newtonian physics by Von Braun has had a dramatic impact and says so! It's a fascinating essay!