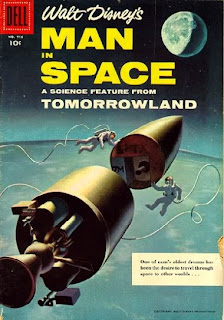 Walt Disney helped sell American public on Space. Man in Space, first of a three-part series in the fifties, proved popular and possibly for its pyrotechnics and inclusion of a multitude of rocket firings! You'll like this film if you like fireworks! The V-2 rocket and WAC Corporal, two early successful rockets, are covered. "The first episode Man in Space originally aired March 9, 1955. Running at about 51 minutes, it was mostly narrated by actor Dick Tufield (who ironically would later be best known as the voice of the Robot on the TV series Lost in Space). Also joining in was [producer Ward] Kimball and such famed scientists as Dr. Willy Ley, Dr. Heinz Haber, and of course Dr. Wernher Von Braun. With a combination of documentary footage and animation, the show took a lighthearted look at rocket history, satellites, and what spacemen would have to face traveling in a rocket. Man in Space was nominated for an Academy Award for Best Documentary Short." A younger audience can get an idea of predominance of German scientists (Operation Paperclip) in the American space program by taking in this show. The present writer grew up with the strong association of a German accent with scientific acumen. Please take in show from a relatively innocent time when prospects of space seemed limitless.