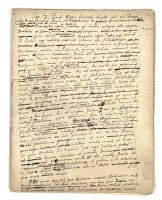 from mailonsunday.co.uk: He laid the foundations of classical physics and is considered to be one of the greatest scientists of all time. But Sir Isaac Newton was also deeply interested in the occult and applied a scientific approach to the study of scripture and Jewish mysticism. Now Israel's national library, which contains a vast trove of Newton's esoteric writings, has digitised his occult collection and posted it online. Among the yellowed texts is Newton's famous prediction of the apocalypse in 2060... However, the curator of Israel's national library's humanities collection said Newton was also a devout Christian who believed that scripture provided a 'code' to the natural world.