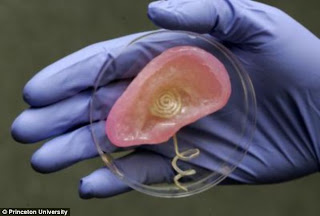 "A breakthrough bionic ear that can ‘hear’ radio frequencies beyond the range of normal human ears has been created by scientists at Princeton University. The researchers used a radical 3D printing technique to create the ear with the electronics of a hearing aid inside it. They say it is a major step towards creating ‘cybermen’ such as those seen in the Terminator films, which combine living cells and electronic circuits."

What's next? The line is already gathering for the bionic equivalent of Viagra!