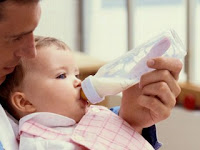 from ap: Traces of a chemical used in rocket fuel were found in samples of powdered baby formula, and could exceed what’s considered a safe dose for adults if mixed with water also contaminated with the ingredient, a government study has found. The study by scientists at the U.S. Centers for Disease Control and Prevention looked for the chemical, perchlorate, in different brands of powdered baby formula. It was published last month, but the Environmental Working Group – a Washington, D.C.-based advocacy organization – issued a press release Thursday drawing attention to it. The chemical has turned up in several cities’ drinking water supplies. It can occur naturally, but most perchlorate contamination has been tied to defense and aerospace sites.