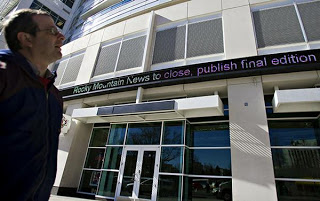 from washington times: The Rocky Mountain News, the oldest newspaper in Colorado, will publish its last edition Friday after owners failed to secure a buyer for the financially strapped daily, making it the latest casualty in an increasingly shaky newspaper industry. Rich Boehne, chief executive officer of owner E.W. Scripps Co., blamed the decision on a plummeting newspaper market hit hard by the advent of the Internet and declining readership. “Denver can’t support two newspapers any longer,” said Mr. Boehne in a newsroom announcement Thursday. “It’s certainly not good news for you, and it’s certainly not good news for Denver.” The tabloid known as the “Rocky” was just two months shy of its 150th anniversary, during which time it won four Pulitzer Prizes. The Rocky lost $16 million in 2008 despite a 2001 joint-operating agreement aimed at propping up Denver’s two daily newspapers, the Rocky and the Denver Post. Scripps announced Dec. 4 that it would put the Rocky up for sale. Although one buyer emerged in mid-January, the company concluded that the buyer was “unable to present a viable plan” for the paper, according to a statement Thursday.