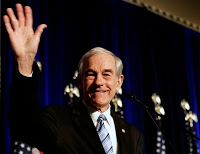 why has ron paul all but suspended his presidential campaign?

from paul joseph watson: Congressman Ron Paul's decision to essentially suspend his presidential campaign and focus instead on safeguarding his Congressional seat will confuse and disappoint many of his supporters, while delighting establishment media debunkers, but the truth of how far we have progressed and the reality of the battles that lie ahead show that the campaign has made a shrewd decision.

no paul endorsement for hawkish mccain

from press tv: Congressman Ron Paul says the foreign policy of frontrunner John McCain is 'un-American, un-Constitutional, immoral, and not Republican'. "I can not support anybody with the foreign policy he advocates, you know, perpetual war. That is just so disturbing to me," Paul was quoted as saying on Monday by the Tribune.

from baltimore sun: After the smoke cleared at the Conservative Political Action Conference – the public withdrawal of Mitt Romney from the Republican presidential race, and the attempt of John McCain to make friends with the party’s staunchest conservatives – a conservative crowd-pleaser stepped forward. Ron Paul, the Republican representative from Texas. Paul was playing on the frustrations in this hall, with many voicing worries about McCain, the all-but anointed nominee.

ron paul vows to continue campaign
from ap: Presidential hopeful Ron Paul said he will not run as a third-party candidate in a new message to supporters that seems to recognize his slim chances at getting the Republican nomination. The Texas congressman wrote on his Web site Friday that he is making cuts to his national campaign staff and that he must also stay focused on not losing the primary for his House seat.

from nytimes: In a message to supporters sent just before 11 p.m. Friday night, Representative Ron Paul, a long-shot G.O.P. candidate from Texas, basically conceded that he’s not going to win the party’s nomination. That said, he’s scaling back his campaign - but not entirely.

from star-telegram: Texan Ron Paul has outlasted a half-dozen other GOP hopefuls. The 72-year-old doctor-turned-politician says he has no plans to quit no matter how everything shakes out.. But few expect him to go quietly into the night. "He is certainly the un-cola of Republican candidates," said Tom Marshall, a political science professor at the University of Texas at Arlington. "Message candidates don't drop out as easily or as quickly."

ron paul to stay in race despite poor showing on super tuesday
from threat level: ABC's Z. Byron Wolf reports on Facebook that Texas congressman Ron Paul plans on staying in the presidential race despite his lackluster Super Tuesday results.

do you believe in life after paul?
from op-ed news: The Ron Paul campaign is over. While he may hang in there for a few more weeks, the hope of Dr. Paul having any sway at a brokered convention has been dashed as he failed to pick up a substantial amount of delegates tonight on Super Tuesday.

ron paul '08: a revolution thwarted?
from abc: The Republican party's Super Tuesday survey of 21 states could be more a time for soul searching than celebrating for the scrappy, insurgent presidential campaign of Texas Rep. Ron Paul.