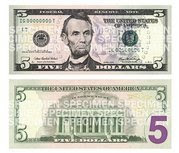 from ap: Abraham Lincoln is getting a little color in his cheeks. New $5 bills bearing the gaunt visage of the nation's 16th president - but with some touches of color added - are making their way to banks and cash registers near you. The bill goes into circulation Thursday. That's when the Federal Reserve, the supplier of the nation's cash, starts shipping the bills to banks, which send them to businesses and eventually into the hands of people in this country and beyond.

in other news, deck chairs rearranged on titanic

retail sales plunge by 0.6%
from ap: Consumers, battered by plunging home prices and a credit crunch, stayed away from the malls in February, pushing retail sales down by a larger-than-expected amount. It was another worrisome sign that the country could be falling into a recession.

from ap: Stocks tumbled Thursday morning as investors recoiled following a further decline in the dollar, spikes in gold and oil prices and a warning that a Carlyle Group fund is near collapse. The major indexes each lost more than 1 percent; the Dow Jones industrial average at times fell more than 200 points.