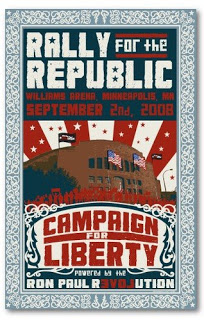 from ap: There's no room at the Xcel Energy Center for maverick Ron Paul, so his acolytes have packed their cars, hitched rides on "Ronvoys" and will pitch tents at Ronstock '08 in Minneapolis in defiance of next week's GOP convention in St. Paul, Minn. More than 9,700 tickets had been sold for the Rally for the Republic, which seeks to bring together activists who are anti-war, anti-government regulation, anti-immigration, anti-taxes, anti-Federal Reserve, anti-outsourcing, pro-individual liberty, pro-civil liberties and pro-Paul...

ron paul nation: the other convention in town

from christian science monitor: If some John McCain supporters suffer from what pollsters have called an “enthusiasm gap,” those of GOP presidential candidate Ron Paul might be accused of an enthusiasm surplus. More than 10,000 members of the Ron Paul Nation paid $17.76 (get it?) to attend a convention in Minnesota to celebrate the Texas congressman’s candidacy and advance his antiwar, anti-government, pro-Gold Standard agenda among Republicans at the official GOP convention in nearby St. Paul.

video: paul downplays reports of negotiations with mccain team
from raw story: While Republican party officialdom has been largely dismissive of Ron Paul's performance in this year's presidential primaries, there are reports that some party members are courting Paul's support - or at least his silence - in exchange for access to this week's convention in St. Paul.

ventura speaks 9/11 truth to crowd of 10k at rally
from 9/11 blogger: During an impassioned speech in which he called for a revolution to take back the country, former Minnesota Governor Jesse Ventura voiced 9/11 truth to the 10,000 in attendance and the millions watching on C-Span and You Tube at the Rally For The Republic yesterday. Ventura also strongly hinted that he is considering running for the presidency in 2012.

update: ventura endorses a 9/11 conspiracy theorist for congress
from ap: Former Minnesota Gov. Jesse Ventura has endorsed a Sept. 11 conspiracy theorist for a congressional seat. Ventura came out Thursday in support of Kevin Barrett, a Libertarian running against incumbent Democrat Ron Kind for western Wisconsin's seat. Barrett is a former University of Wisconsin-Madison lecturer who believes the U.S. government was behind the Sept. 11 terrorist attacks and has discussed his views in class.

video: ron paul on washington journal
from c-span junkie: Ron Paul talked about his “Campaign for Liberty” rally set for today and his thoughts on the current campaign, and he responded to telephone calls and electronic mail.

video: ron paul says it's time to end the empire
from the real news: Paul Jay interviews Ron Paul from the "Rally for the Republic"

from al-jazeera: Call it the real Republican convention. At least that is how Ron Paul, a US congressman for Texas, and his supporters billed their campaign's Tuesday night "rally for the republic", in which they called on the party to "return to its roots". From the looks of it, Paul, who suspended his campaign for the Republican nomination in June, could almost be accepting the party's presidential nomination himself. Almost 15,000 people came from all over the country to hear him speak.

ron paul steals mccain’s thunder
from russia today: Texas Congressman Ron Paul may not be the next US President. But the firebrand Republican, who failed to win the party’s nomination this year, is still hugely popular with grassroots supporters. He staged a rally in Minneapolis as an alternative to John McCain’s Republican Convention in nearby St Paul, stealing much of the limelight from the party’s official presidential candidate.

conspiracy theorists, unite!
from msnbc: That's what the dozens of Ron Paul supporters shouting outside of the Xcel Energy Center yesterday afternoon were telling Americans to do. They said the terrorist attacks on Sept. 11, 2001, were an inside job... So why are Ron Paul supporters, many of them Republicans themselves, protesting the Republican convention? "We want to bring the GOP back to its roots," insisted 24-year-old Adam Gross of Kansas City, Mo, who said he’s a registered Republican. He had slapped a bumper sticker onto his Ron Paul sign that read, "9/11 was in inside job." 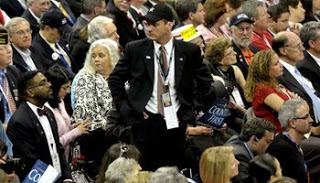 from washington times: Fearing demonstrations from Ron Paul delegates here at the Republican National Convention, the party has created a "black-hat" squad to track the Paulites and other potential troublemakers to make sure they don't cause a scene on the convention floor.

Identified by their black baseball caps emblazoned with a white star, squad members keep an eye on delegates they fear might cause a scene. The squad is empowered by the convention managers to take delegates' credentials and kick them off the convention floor - a step one convention official said would be unprecedented.

Squad members have made "their presence known, to let all people know big brother's watching them," said a Republican official familiar with the squad who has been involved in the last 10 GOP conventions.