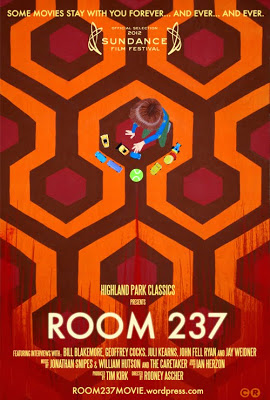 ‘Room 237,’ Documentary With Theories About ‘The Shining’

from nytimes: When “The Shining” was released in 1980, many viewers, including the critic Pauline Kael, left theaters mystified by what they had just seen... Three decades on, scholars and fans are still trying to decipher this puzzle of a film directed by Stanley Kubrick... “Room 237,” the first full-length documentary by the director Rodney Ascher, examines several of the most intriguing of these theories. It’s really about the Holocaust, one interviewee says, and Mr. Kubrick’s inability to address the horrors of the Final Solution on film. No, it’s about a different genocide, that of American Indians, another says, pointing to all the tribal-theme items adorning the Overlook Hotel’s walls. A third claims it’s really Kubrick’s veiled confession that he helped NASA fake the Apollo Moon landings. The documentary’s biggest leap of faith comes with Jay Weidner, who posits that Mr. Kubrick helped NASA fake the Apollo Moon landings, then used “The Shining” to both confess his involvement — and brag about it. Mr. Weidner is at work on a DVD about the Kubrick-Apollo connection, his second, and cites as evidence a sweater worn by Danny with “Apollo 11” on it, and the hexagonal design on the hotel hallway carpet pattern, which he argues is a dead ringer for the aerial view of the Apollo launching pad. “The entire substory of ‘The Shining,’ ” Mr. Weidner said in an interview, “is the story of Kubrick making the Apollo footage and then trying to hide it from his wife, and then her finding out about it.”