roscosmos: us radars cause of phobos grunt failure? 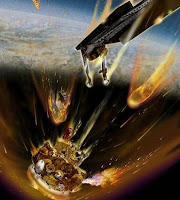 Roscosmos chief Vladimir Popovkin wondered openly last week why many failures occurred when the Russian space "craft were over the western hemisphere? ... I do not want to blame anyone, but today there are some very powerful countermeasures that can be used against spacecraft whose use we cannot exclude,' he told the Izvestia daily on January 10," as reported by Mars Daily. A Deccan Herald article reports from another Russian Daily source that Russians suspect the Marshall Islands US Radar station, while monitoring the trajectory of Phobos Grunt, may have unintentionally harmed the craft with megawatt power. Is it a covert space war?