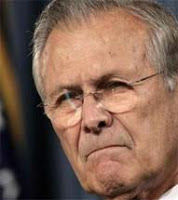 from raw story: Former Secretary of Defense Donald Rumsfeld will testify at a Wednesday hearing on the friendly fire death of Army Specialist and former NFL player Pat Tillman.

“In a late breaking development, Secretary Rumsfeld will appear before the Oversight Committee tomorrow,” stated a release from the House Committee on Oversight and Government Reform.

The release was confirmed by the Oversight Committee’s Republican staff.

Earlier, Raw Story reported that Rumsfeld had “a conflict,” and had submitted answers to questions for the record.

No explanation was available at press time for Rumsfeld’s change of heart.

update: rumsfeld denies tillman cover-up
from eontario: Defense Secretary Donald Rumsfeld has denied that he was any part of a cover-up to hide the truth as to how Pat Tillman, former NFL star and Army Ranger, died during battle.

When Tillman originally died it was not revealed truthfully how it all happened. The truth finally came out thogh that the death of Pat Tillman was actually due to friendly fire. A House committee was hard at work on Wednesday but was told by Rumsfeld that he was no part of the cover-up to hide the truth.

One response to “rumsfeld changes course, will testify on tillman death”