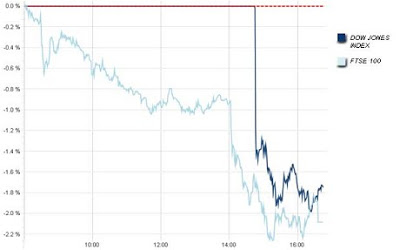 s&p cuts US outlook from stable to negative

US seeks to reassure markets on debt after s&p warning

S&P affirmed the U.S. federal government's "AAA" rating but, for the first time, changed its long-term outlook to negative from stable, signaling there's at least a 33% chance that it will downgrade the country's debt rating within two years.

The outlook revision comes as the White House and Congress are mired in a debate about how to contain the country's rapidly rising public debt. The International Monetary Fund last week pointed the finger at the world's largest economy, warning that a delay in slashing the budget deficit might cause the bond market to lose faith in the U.S.'s ability to do so, with ripple effects across the U.S. and global economy.

"We believe there is a material risk that U.S. policymakers might not reach an agreement on how to address medium- and long-term budgetary challenges by 2013," S&P said. Because of the U.S. budget process, this would mean agreeing on a broad deficit-cutting plan before the 2012 presidential elections, which many analysts view as a challenge.

S&P noted the gap between Republicans and Democrats about how to cut the deficit "remains wide." Even if an agreement is made, "there is a reasonable chance that it would still take a number of years before the government reaches a fiscal position that stabilizes its debt burden," S&P said.

related econocrash updates:
workforce in US drops to 27yr low;
as big US corporations moving jobs out of US*
for richest 400, income quadruples while tax rate plunges*
morgan stanley fails $3.3b debt payment, hands central tokyo office to blackstone*
even ben stein is warning an economic collapse is coming*
$50 silver - the price point of liberty*