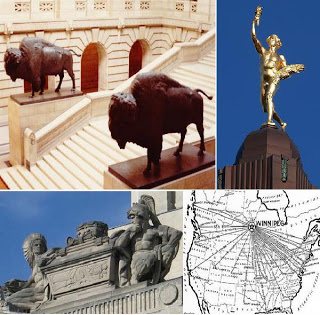 Today, few people realize occult significance built into many public buildings - hidden in plain view!  The Manitoba Legislative Building (MLB) in Winnipeg, built in accord with masonic principles, has gained increased attention thanks to recent research of Frank Albo. A renewed appreciation for subtleties of western mystery traditions, would serve average person with better grasp of occult practices by secret societies who manipulate our world! MLB located only miles from geographic center of North America, a site picked for its esoteric energy as presence of ley lines are described in a HenryMakow.com article, "...[alignments] are intentional and are designed to magnify and give power to the evil forces in the city. There are many other examples of these 'ley lines' in Winnipeg."

Bison (pictured), whose presence on grand staircase, are meant to ward off evil as Apotropaic symbols just as bulls were used in ancient temples. Hermes (pictured) AKA "the golden boy" is poised atop MLB with many references to father of western esoteric tradition inside and considered author of masonic initiation rites. Albo believes MLB is a recreation of Solomon's temple and possesses principle features: an area of protection, an altar and a holy of holies. Finally, Albo felt his interpretation complete, when the Ark of the Convenant was located on the roof, disguised as a war chest. The Vigilant Citizen (VC) also covered the occult significance of MLB and worth a look. VC observes, "...great amount of details in this recreation of Solomon’s Temple reveal the importance of secret societies and hermetic philosophies in today’s democracies." The present writer feels public doesn't appreciate significance of these principles, whose influence permeate our everyday lives!

You may take in eight minute Albo video, explaining his interpretation. A recent Corbett report interview of Albo is available here. Albo has also written a book, "The Hermetic Code", which sums up significance of the MLB in a phrase!