Saints Alive! ‘Millions’ Believe In The Power of Money

David Lynch made a G rated movie for Disney called the ‘The Straight Story,’ about a man who rides his tractor cross-country to see his ailing brother. The only Danny Boyle movie that isn’t rated R is kind of a kid’s Christmas movie about saints. But really it’s also about money – and what we value and what we believe in. 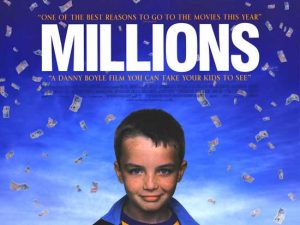 Millions is a 2005 British comedy-drama film directed by Danny Boyle… The screenwriter Frank Cottrell Boyce adapted his novel while the film was…being made. [The novel] subsequently awarded the Carnegie Medal.

Now, from the director of ‘Trainspotting’ and ’28 Day Later’ comes …a heartwarming story about a British family in transition after the mother’s recent death. Like a lot of kids Damian (Alexander Etel) spends much of his time daydreaming. Unlike a lot of kids he happens to be quite knowledgeable about the Bible and also has an unusual hobby. He has imaginary conversations with Catholic saints. It becomes evident that this is his way of coping when we see him ask them if they have met his mother in heaven.

The plot kicks into gear when Damian is greeted with a large bag of cash that literally falls from the sky. Damian calls it a gift from God and quickly establishes himself as the film’s moral compass. He resists the pleadings of his selfish big brother and decides that the money should be given to the needy. But there’s a catch. The UK is on the verge of switching to the Euro so time is of the essence. The two boys embark on a series of humorous attempts to quickly disburse the funds.

This is a lighter entry in the #DeepFocus series, sure. But it was a film I always remember loving – and since we’ve been talking about money so much here lately (Tulipomania, the Rothschilds Musical) I thought it would be an interesting one to share with you. We’ve not had anything like this ever happen in America that I know of, but could it be in the future? What if the thing you always thought had value suddenly didn’t? Saints or money? Is there a difference?