Salt, Sugar, Fat: How the Food Giants Hooked Us by Michael Moss – review 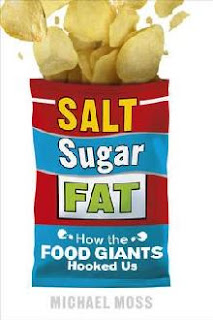 from guardian.co.uk: New York Times journalist Michael Moss spent three-and-a-half years working out how big food companies get away with churning out products that undermine the health of those who eat them. He interviewed hundreds of current and former food industry insiders – chemists, nutrition scientists, behavioural biologists, food technologists, marketing executives, package designers, chief executives and lobbyists. What he uncovered is chilling: a hard-working industry composed of well-paid, smart, personable professionals, all keenly focused on keeping us hooked on ever more ingenious junk foods; an industry that thinks of us not as customers, or even consumers, but as potential “heavy users”.

How do the food giants do it? Moss’s central thesis is that junk food is a legalised type of narcotic. By deliberately manipulating three key ingredients – salt, sugar and fat – that act much like drugs, racing along the same pathways and neural circuitry to reach the brain’s pleasure zones, the food and drink industry has created an elastic formula for a never-ending procession of lucrative products.

As Moss explains, the exact formulations of addictive junk foods (and drinks) are not accidental but calculated and perfected by scientists “who know very well what they are doing”. Their job is to establish the necessary “bliss point”, the precise amount of sugar, fat or salt guaranteed to “send consumers over the moon”.

There’s nothing earth-shatteringly new in Moss’s assertion that sugar, salt and fat are the unholy trinity of bad food. Food campaigners on both sides of the Atlantic have been saying as much for decades. But the nutrition debate is evolving, and this book is behind the curve. In both the US and UK, the characterisation of saturated fat as a dietary antichrist is being challenged, not by the junk food industry, which makes a mint from spewing out supposedly healthy low-fat products, but by nutritionists and scientists. For instance, a recent review of scientific studies on fat, published in the American Journal of Clinical Nutrition, concluded that “there is no convincing evidence that saturated fat causes heart disease“.

The problem here is that Moss doesn’t even reference this discussion, merely damning fat in a generic way. So it sounds as if he believes that natural foods that contain it, such as cheese, cream and red meat, are devils incarnate. Many health commentators will have no problem signing up to the argument that the chemically hardened, industrially refined and wholly corrupted oils used to make products such as crisps and fried chicken are undeniably bad for us, but Moss’s all-out attack on fat is more contentious.

Indeed, this failure to draw a distinction between processed junk and natural food is the flaw that runs through this book and weakens its otherwise worthwhile attack. Sugar, salt and fat get lumped together in physiological terms as addictive substances.