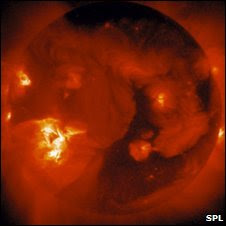 from bbc: Researchers say the Sun is awakening after a period of low activity, which does not bode well for a world ever more dependent on satellite navigation. The Sun's irregular activity can wreak havoc with the weak sat-nav signals we use. The last time the Sun reached a peak in activity, satellite navigation was barely a consumer product. But the Sun is on its way to another solar maximum, which could generate large and unpredictable sat-nav errors.

It is not just car sat-nav devices that make use of the satellite signals; accurate and dependable sat-nav signals have, since the last solar maximum, quietly become a necessity for modern infrastructure. Military operations worldwide depend on them, although they use far more sophisticated equipment.

Sat-nav devices now form a key part of emergency vehicles' arsenals. They are used for high-precision surveying, docking ships and plans are even underway to incorporate them into commercial aircraft. Closer to home, more and more trains depend on a firm location fix before their doors will open.

Simple geometry
The satellite navigation concept is embodied currently by the US GPS system and Russia's Glonass network, with contenders to come in the form of Europe's Galileo constellation and China's Compass system. It depends on what is - at its root - a simple triangulation calculation. A fleet of satellites circling the Earth are constantly beaming a radio signal with two bits of exceptionally precise information: where exactly they are, and at exactly what time.

A sat-nav receiver on Earth - or on a ship or plane - is equipped with a fairly precise clock and the means to collect signals from the satellites that happen to be in its line of sight. It then works out, based on how long it took those signals to arrive, how far it is from each of those satellites. Some simple geometry yields its position.

1. Satellites advertise their exact position & the precise time at which they are sending it

2. The signal travels through the outer atmosphere, the ionosphere; its speed depends on how much the Sun's radiation and particle winds are affecting the ionosphere's composition

3. A receiver on Earth determines how long the signals took to arrive from a number of satellites, calculating the position from the time differences

But those signals are incredibly weak and, as researchers have only recently begun to learn, sensitive to the activity on the Sun. Solar flares - vast exhalations of magnetic energy from the Sun's surface - spray out radiation across the electromagnetic spectrum, from low-energy radio waves through to high-energy gamma-rays, along with bursts of high-energy particles toward the Earth.

The radiation or waves that come from the Sun can make sat-nav receivers unable to pick out the weak signal from satellites from the solar flare's aftermath. There is little that current technology can do to mitigate this problem, with the exception of complex directional antennas used in military applications. Sat-nav receivers will be blinded for tens of minutes, probably a few times a year at the solar maximum.

Charged up
A further complication comes from the nature of the outermost layer of the Earth's atmosphere, the ionosphere. That is composed in part of particles that have ionised, or been ripped apart by radiation from the Sun, with the composition dependent on how much radiation is coming from the Sun at a given time.

The problem comes about because sat-nav technology assumes that signals pass through at a constant speed - which in the ionosphere isn't necessarily the case. "The key point is how fast the signals actually travelled," said Cathryn Mitchell of the University of Bath.

"When they come through the ionosphere, they slow down by an amount that is actually quite variable, and that adds an error into the system when you do the calculations for your position," Professor Mitchell told BBC News.

The amount of solar activity runs on many cycles; the ionisation will be different on the sun-lit side of the Earth from the night side, and different between summer and winter; each of these cycles imparts a small error to a sat-nav's position.