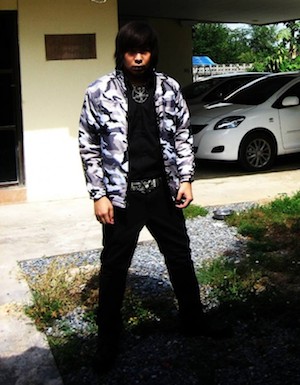 Satanist Murders Metal Singer Because He Wasn’t Really A Satanist

Fan kills black metal singer for not being Satanic enough

from metalinjection.net: The Bangkok Post reports that Surrender of Divinity vocalist, Samong Traisattha, was murdered last Wednesday, January 8. He was 36 years old. He was murdered by a supposed fan of his music. Traisattha's widow, Jaruvan Surapol says the fan, Prakarn Harnphanbusakorn (pictured), came to their house last Wednesday to do some t-shirt screen printing. Jaruvan went to put their child to sleep and when she returned she found her husband lying in a pool of blood. There was drinking and police believe that an arguement ensued which resulted in the murder. The hunt was on for Prakan, when on Friday, the Facebook page for Maleficent Meditation began taking credit for the murder. Officials believe this is Prakarn, who posted incredibly gruesome photos of the murder (NSFW, and NSFLife)... As for his reasoning, he claims he is a Satanist through and through.