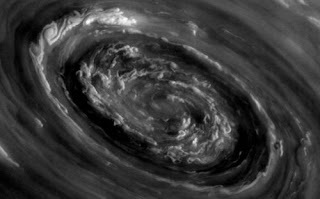 A fascinating feature of Saturn's pole is its hexagon! The Daily Galaxy reports on details of natural phenomenon  in article, "Saturn's Hexagon - One of the Most Bizarre Things Seen in the Solar System."  "One of the most bizarre things seen in the solar system is captured in the image...taken on 27 November by NASA's Cassini spacecraft. Cassini's camera zoomed into Saturn's polar hexagon storm's eye from a distance of about 250,000 miles (400,000 kilometers). The spacecraft observed in infrared wavelengths, which can peer through the top layer of clouds to reveal the complex texture beneath. NASA's Cassini spacecraft has been traveling the Saturnian system in a set of inclined, or tilted, orbits that give mission scientists a vertigo-inducing view of Saturn's polar regions, yielding spectacular images of roiling storm clouds and the swirling vortex at the center of Saturn's famed north polar hexagon."  Holy Hexes first visited Saturn's Hexagon in 2010, a link to post here.