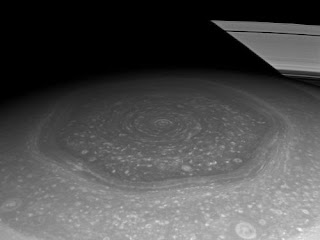 The Daily Galaxy brings us new pix of Saturn's North Pole and its amazing hexagon!  "Saturn's polar hexagon was originally discovered in images taken by the Voyager spacecraft in the early 1980s. It encircled Saturn at about 77 degrees north latitude and was estimated to have a diameter wider than two Earths. The jet stream is believed to whip along the hexagon at around 100 meters per second (220 miles per hour). The north polar hexagon shown in the Cassini  image ...[left] basks in the Sun's light now that spring has come to the northern hemisphere. Many smaller storms dot the north polar region and Saturn's signature rings, which appear to disappear on account of Saturn's shadow, put in an appearance in the upper-right background," reports article.  The Saturn Spring is reason for new pix as hexagonal shaped pole baths in springtime sunlight that comes around every 30 years:  "The images of the hexagon, whose shape is the path of a jet stream flowing around the north pole, reveal concentric circles, curlicues, walls and streamers not seen in previous images. The last visible-light images of the entire hexagon were captured by NASA's Voyager spacecraft nearly 32 years ago, the last time spring began on Saturn."