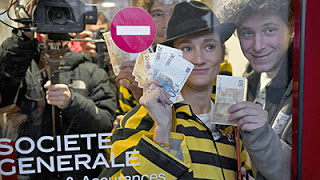 Scheme to Create a Run On Global Banking System Fails 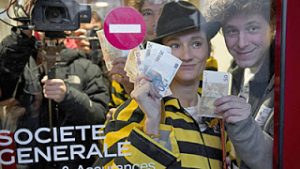 from dw-world.de: Ex-soccer star Eric Cantona's plan for people to withdraw all their money from banks has failed. By the time French banks closed on Tuesday, very few appeared to have followed his call. Tens of thousands of people heard the call by former French footballer Eric Cantona to bring down the banking system that sparked the global economic crisis - but few acted on it on Tuesday, the day Cantona suggested his anti-capitalist revolution should begin.

The protests were few, isolated and largely symbolic. One group of activists in Paris emptied their bank accounts from a branch of Societe Generale and opened accounts at the nearby branch of a cooperative bank. But in general, it was business as usual in France's banking institutions.

Cantona, now a successful actor and an icon to many, had appealed to people to withdraw their money from the banks in an attempt to punish the "corrupt, criminal" banking system.

"The three million people in the street, they go to the bank, withdraw their money, and the banks collapse... That's a real threat, there's a real revolution," the ex-football star said in an online video watched by tens of thousands of people in France and beyond.