school spied on kids via webcams on school-supplied laptops 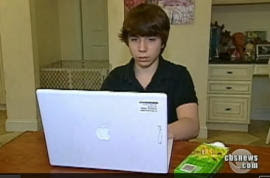 from pcworld: In case you haven't been following the plot of Webcamgate, starring the Lower Merion School District in Southeastern Pennsylvania and a cast of thousands, here's the skinny: Last week the Robbins family, whose son Blake attends LMSD's Harriton High, filed a class-action suit against the district alleging that it's been spying on its students via webcams on school-supplied MacBooks.

The suit came about after last November to discuss "Blake Robbins was called into the assistant principal Lindy Matsko's office last November to discuss "inappropriate behavior" he was displaying -- at home. The proof? A snapshot of him taken with his laptop's Webcam. Apparently Matsko thought Blake was popping pills. According to Robbins, he was merely eating candy: Mike-N-Ikes. (A classic gateway drug -- before you know it, he'll be deep into Good-N-Plenty and then totally hooked on Tic Tacs.)

The idea that the school could peer into the Robbins' home -- and by implication, the homes of nearly 2,400 other students in the district -- blew their minds. It also may have violated dozens of federal and state laws regarding privacy, wiretapping, and electronic communications, as alleged in their suit PDF.

The school district's response? Yes, we have the ability to activate students' webcams remotely, but it's strictly used for tracking lost or stolen laptops, says school superintendent Dr. Christopher W. McGinley. No, we didn't tell any of the students or their families about it. Oops. Our bad... Interestingly, while the district failed to inform parents about the technology, it did take time to create a video lauding the remote access features of the software, LANrev 4.6 (now Absolute Manage), which it created for MacEnterprise.org in June 2008.