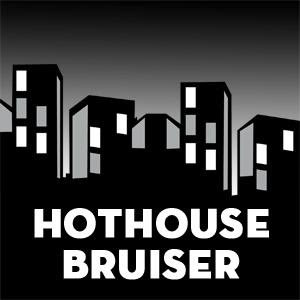 Science fiction audio, when well done, rivals any form of entertainment!  Thanks goes to Radio Drama Revival (RDR) for turning us on to "Episode 327: Entering the Hothouse and Cruising with the Bruiser." A hybrid combo of gumshoe detective story and Blade Runner sci-fi dystopia, where a section of Los Angeles quarantined due to outbreak of binary disease!  "Take a surly trip to a gritty, dystopian neighborhood of Los Angeles called the 'Hothouse' in this thrilling new serial by TV writer Joel Metzger.  All of downtown LA is enclosed by a massive glass wall — making a
hyper-capitalist, Orwellian, city-within-a-city called 'The Hothouse.' Jason 'Bruiser' Brusman used to be a cop — but after getting trapped
in the Hothouse, he’s become an enforcer for the powerful corporation
that controls the Quarantine. Part detective, part hit-man, Bruiser
slugs it out with grimy Hothouse underground — with one twisted plot
leading to the next. Bruiser’s heart is outside the walls — with his wife and daughter —
and every day he’s separated from them… he becomes more and more like
the grimy underworld he battles. In the first two episodes of Hothouse Bruiser,
we’re introduced to the rough and tumble streets of the Hothouse, as we
meet Bruiser in his quest to escape the walls. But it’s not just glass
that’s in his way – soon we have snipers, the corrupt corporation, sexy
and dangerous dames, and darker figures trying to do him in,"  informs RDR website.  Hothouse Bruiser proves top flight entertainment with excellent production and well-known names such as Traci Lords and Claudia Christian in the audiocast!