Since 2005, Media Monarchy has covered the real news about politics, health, technology and the occult - all remixed with music and media that matters.
Home > #CyberSpaceWar, Uncategorized 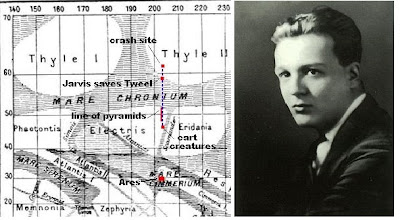 Gregg Margarite, a prolific audio book reader, provides description at Librivox website of science fiction writer Stanley G Weinbaum:  "...best known for his short story 'A Martian Odyssey' which has been influencing Science Fiction since it was first published in 1934. Weinbaum is considered the first writer to contrive an alien who thought as well as a human, but not like a human."  Weinbaum died from lung cancer only 18 months after writing story, a promising career cut short.

"A Martian Odyssey" caught attention of other writers affecting how sci-fi stories were written:

"Isaac Asimov has described "A Martian Odyssey" as "a perfect Campbellian science fiction story, before John W. Campbell. Indeed, Tweel may be the first creature in science fiction to fulfil Campbell's dictum, 'write me a creature who thinks as well as a man, or better than a man, but not like a man'." Asimov went on to describe it as one of only three stories that changed the way all subsequent ones in the science fiction genre were written. It is the oldest short story (and one of the top vote-getters) selected by the Science Fiction Writers of America for inclusion in The Science Fiction Hall of Fame, Volume One, 1929–1964," according to Wikipedia.

You can follow Dick Jarvis, story's protagonist, as he treks across hundreds of miles of Martian landscape (picture) and what he encounters along the way.  Margarite reads "A Martian Odyssey" in his popular style. Thanks goes to SFFaudio for the link!