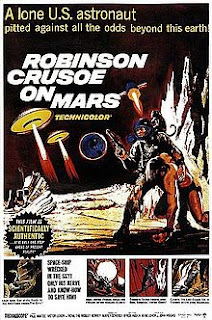 Robin Crusoe On Mars is a 1964 science fiction cult classic directed by Byron Haskin, who also directed War Of The Worlds. The plot revolves around Commander Christopher 'Kit' Draper (Paul Mantee), who must learn to survive on Mars after his ship, Mars Gravity Probe 1, is forced down in a near miss with a meteor. Draper conquers survival with help from companion, Mona a Wooly Monkey, whose animal instincts at times seem ahead of the Commander. Draper soon learns yellowish rocks he's been using as charcoal also provide breathable oxygen. An underground pool of water is accidentally found, when Draper falls through Martian surface near pool with edible plants that grow in it. The Commander suffers greatly from Martian isolation, decides to explore an interplanetary ship sighting, in belief, it's a rescue ship. Draper spots human slaves at work underneath powerful beams of alien ships mining rock. The alien mining ships closely resemble Martian war machines of the 1953 version of "War of the Worlds." The Commander meets up with escaping slave played by Victor Lundin, who is quickly given name 'Friday,' after character from original Robinson Crusoe story. Friday is taught English and shares his oxygen pills with the Commander, the two become fast friends. The black bracelets placed on Friday's wrists by the aliens, allows them, to track the two for much of the movie. Draper finally succeeds in removing the bracelets after arriving at a polar ice cap. A meteor strikes the cap and melts the ice, and in quick succession, they're rescued shortly after receiving a radio communication from Earth. The fantastic ending weakens an otherwise strong story. A song written and played at conventions by Lundin, "Robinson Crusoe on Mars," tends to confirm movie's strong following and cult status.