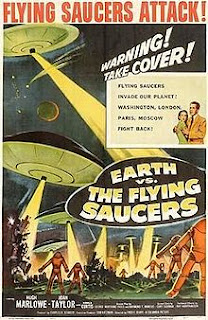 It's the weekend and time to escape with the 1956 science fiction classic, Earth vs. the Flying Saucers. The film directed by Fred F. Sears, but overshadowed by the special effects wizardry of legendary Ray Harryhausen still entertains over fifty years later. The stars of the film are Hugh Marlowe and Joan Taylor. Marlowe as Scientist Russell Marvin, head of project Skyhook, gets buzzed by a saucer early in film only to discover later it was an attempt to communicate. Marvin soon learns his project's rocket launches are shot down shortly after launch into space. Marvin reports his alien suspicions to superiors and presents accidentally recorded tape message for them but is met with skepticism. The scientist feels he must act and communicates successfully with the aliens. "Impatient, Marvin contacts the aliens and steals away to meet them, but Carol[Taylor] and Major Huglin follow him. They and a motorcycle cop are taken aboard a spaceship resting on Malibu Beach. They discover that the aliens have extracted knowledge from Gen. Hanley's brain, and now have him under their control, although they reassure [daughter] Carol that they can restore him. They also claim to be the last of their species and that they shot down the satellites because they thought they were weapons. As proof of their power, the aliens give Marvin the coordinates of where they sank a destroyer that had fired on them. the humans are released with the message that the aliens want to meet the world's leaders in 56 days in Washington, D.C. to negotiate an occupation," adds Wikipedia.

The exchange with the aliens leaves little doubt as to their ambitions to take over, one way or another. "The flying saucers are invulnerable to conventional weapons, but from his observations Marvin develops an ultra-sonic weapon, which is later upgraded to an effective anti-magnetic weapon..." continues the Wikipedia entry, a weapon which allows Earth to overcome the saucers. The Washington DC scenes are perhaps more gratifying today as the aliens arrive for the appointed summit date to be shot down by Marvin's truck-mounted weapons, "one saucer clips and topples the Washington Monument, while another crashes into the Capitol Building and a third into Union Station." You may take in a matinee showing below at your leisure and admission is free.

After the movie, you may click for a 90th birthday presentation to Ray Harryhausen in 2010, a special effects film history treat in one sitting! A nice biography of Ray Harryhausen is available here.