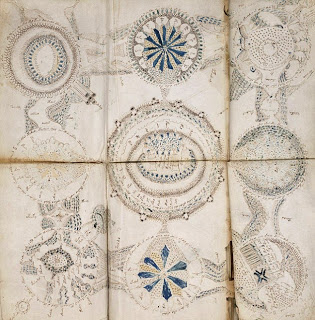 from dailymail: The bizarre sequence of symbols, charts and figures have baffled the world of science for the last 100 years. But now thanks to carbon dating, researchers have finally begun to pick apart the secrets of the Voynich manuscript, the most alien artifact of its kind in the world. They have been able to determine for the first time that it was written in the early 15th century, more than 100 years earlier than previously thought. And while they are no closer to understanding what the complex text actually means, putting a date on it takes them a huge step closer to discovering what it is really about. What is known sounds like the plot from a film and makes the Da Vinci Code pale by comparison. The manuscript was discovered by rare book dealer Wilfrid Voynich in the Villa Mondragone near Rome in 1912 as he was trawling through a chest of books.