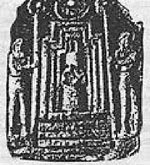 Is there a Stargate in Iraq, as theorized by many as the real motivation to occupy Iraq? Is it located at the ancient fortress of Qalaat-e-Julundi and rumored to be protected by giant scorpions or at the Dark Ziggurat of Enzu, both, in the Little Zab River Valley? Or, is it near Baghdad at the Sumerian Ziggurat of Kurigalzu? Or, is it in an underground base north of Tikrit built by aliens given sanctuary by Saddam Hussein after their crash in 1998?  Is there a secret race to gain control over a potential stargate (pictured) in anticipation of the return of Nibiru? Michael Salla published before the 2003 war in Iraq, "An Exopolitical Perspective on the Preemptive War Against Iraq," writes there is a stargate, possibly, in southern Iraq at Uruk. The war is a cover for competing clandestine parties who seek control over ancient ET tech in Salla's view. This extraterrestrial view has traction in some circles. William Henry is another writer, who helped popularize idea, the Iraq war is about ancient tech and return of Nibiru. Did you think the war was only about oil? Some writers believe the war's motivations reside deeper in our distant past.