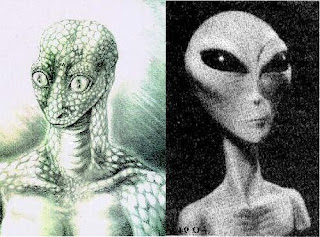 Has World War III already started? Is it between the United States and Russia or China--or even Iran? No, Michael Prince informs the war already underway, is, between humanity and hostile ETs, more specifically Greys and Dracos! Alfred Lambremont Webre writes in an Examiner article, the story of a test tube baby, alien-DNA enhanced, trained to be an assassin cyborg super solider. Whew! Michael Prince born in 1976 in London, asserts, he's a product of Project Mannequin. The project started in 1972 is still run from an underground base AL/499 in Peasemore, Berkshire, England, according to his book, "James Casbolt MI6 - Buried Alive" (ch 1-7 pdf). The project is a mind control and genetic manipulation program! Michael Prince aka James Casbolt relates his personal progression from test tube baby, training subjected to growing up and implants. Webre, who lives in British Columbia, covers story that has much of its roots at Fort Nelson, BC.

Michael Prince's super soldier story is so wild, a reader is tempted to dismiss it if not push it actively out of mind! The details offered, unfortunately, have a disquieting element of plausibility. Princes' "tale" includes widespread NSA operations in other countries and the reference to the mind control facility at Fort Nelson as a "Nazi SS Q552 trauma-based mind control training base." Prince aka Casbolt reveals in this interview, borders have little meaning and Nazis are still around. Human affairs are proving more complex than a line on a map!  Prince attests George H W Bush and the Queen Mother were major programmers.

In the book, Prince hints at the truth behind intelligence agencies, "forget about James Bond movies; much of the secret service apparatus in the U.K and U.S is an occult, pedophile network run by corrupt factions of the “Illuminated” degrees of Freemasonry (33rd degree and above)." The most interesting observation made by Prince is when he relates the, "..most important technology the intelligence community uses is scalar/radio sound based." The author provides some details how sound relates to mind control and PSI abilities, also, part of Project Mannequin.

One of Prince's roles as a super soldier was to communicate telepathically with Pleiadians. Prince is of the belief Pleiadian ships surround our planet--the good guys--opposed to the inhumane methods of the Grey/Draco faction. “The simple answer is that I’ve been in direct contact with them since I was child. Part of my role in Project Mannequin was to make telepathic contact with the large Pleiadian mother ships in the outer atmosphere and then pass the messages onto Commander Clavius and other people. This was all done while I was in the tripseat."

The Grey/Draco faction possesses a formidable weapon, a network of crystal-based computers that includes HAARP. The network is referred to as the Tablets of Destiny, which Pleiadians must respect. "Michael Prince’s message is ultimately optimistic. He states that the Military Industrial Extraterrestrial Complex [MIEC] is currently using a “Tablets of Destiny” supercomputer system that includes the HAARP-aerosol/chemtrails and Artificial Intelligence mind control system to attempt planetary ecocide and genocide. Mr. Prince states that the Pleiadian fleet is here to liberate humanity and will be successful." Prince is confident humanity will prevail because of our superior survival dynamics.

This account doesn't do complete justice to Prince's story, an alternative interpretation of the hidden history of alien-human relations is also provided. Prince relates it was the Pleiadians, who declined to enter into a treaty in 1954, because of mankind's refusal of Pleiadian's demand to disarm our nuclear arsenals. Is Prince's story a psyop? The present writer likes Webre and his views but his background of Yale and Stanford Research Institute raises red flags!