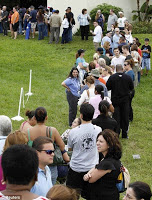 from daily mail: The American presidential election could descend into electoral chaos on Tuesday as unprecedented numbers of voters turn out to cast their ballot in a system that is largely untested. The U.S. has an electoral system that is not organised, designed or funded to cope with ‘anywhere near a 100 per cent turnout’, a director of a leading independent electoral reform group has said. As an estimated 130million Americans head to the polls, Doug Chapin, director of The Pew Charitable Trust’s Electionline.org, said voter turnout will ‘dwarf’ all other problems in this year’s presidential election.

scarborough: ‘ghost in the machine’ could upset obama victory
from raw story: In a little-noticed comment over the weekend, MSNBC commentator Joe Scarborough said Sen. Barack Obama (D-IL) had two things to fear – complacency by supporters given his wide lead in the polls, and a “ghost in the machine.” “Polls are getting hard to read at this point,” MSNBC’s Mika Brzezinski remarked on Sunday’s edition of Morning Joe.

obama & mccain belong in the hague, not the white house

from daily dose of terror: The naivete and idiocy of the American public knows no lows. To think that millions will still go into polling stations, where there is no transparency, no paper ballots and 8 years of proven election fraud, is beyond an exercise in futility, it’s deep denial – The denial that America died years ago. Do people not know that we had a coup d’etat on 9/11 in 2001? How could “elections” be even considered when the entire U.S. Government has been operating as a criminal enterprise? Boycott the staged elections (scripted pro-wrestling for pseudo intellectuals) and pursue direct action against the traitors to humanity parading around as decent Americans.

from dpa: Barack Obama’s grandmother, who helped raise the Democratic presidential candidate in Hawaii, passed away Monday after a prolonged battle with cancer. Madelyn Dunham, 85, had been gravely ill for weeks, prompting Obama to interrupt his campaign for a few days last month to visit her in Honolulu, Hawaii. ‘She was the cornerstone of our family and a woman of extraordinary accomplishment, strength and humility,’ read a statement from Obama and his half-sister, Maya Soetoro-Ng. ‘Our debt to her is beyond measure.’ The news of Dunham’s passing comes just one day before the US presidential election, which has Obama holding a significant lead over Republican rival John McCain.

last american birth ‘witness’ dead day before election
from total411: Madelyn Dunham was probably falsely listed a witness on a fraudulent registration of home birth made contemporaneously by Barry’s mother, Stanley Ann Dunham. As Stanley Ann had been an Hawaii resident for less than twelve months, she would not have have been allowed to register a foreign birth at all. The deception at the time was for the purpose not of establishing natural-born American citizenship, but for mere Hawaii citizenship! The never-seen and little-heard Madelyn Dunham has been announced dead today. As Obama’s communist-sympathizer American grandmother, she was the last living American to have been intimately and contemporaneously acquainted with the circumstances of the birth and conception of Barack Hussein Obama II. Several cases, including a pending writ of certiorari at the Supreme Court of the United States, are challenging Obama’s claims to being a “natural born” citizen of these United States.

alan keyes’ vp candidate sues obama on birth cert
from people’s passions: Vice-presidential Candidate Wiley S. Drake Sr. to file in court asking to de-certify Barack Obama because he has refused to release proof of being a natural-born citizen, thereby disqualifying Obama in his bid for the Office of President. The recent lawsuit in Washington State demanding their Secretary of State to vet the citizenship credentials of Barack Obama has spawned a slew of similar suits with new lawsuits filed and/or prepared in WA, FL, NC, CO, CA, OH, FL, CT, GA, TX, MI. Related lawsuits HI, US District.

top obama advisor has long ties to neocons
from ipsnews: With the 2008 presidential campaign at its end, pundits have begun to discuss in earnest what expected winner Barack Obama’s administration might look like. An important piece of evidence is Obama’s campaign team, which largely escaped the harsh scrutiny that his opponent’s lobbyist-laden team received. Because of Obama’s relative inexperience on foreign policy, it is this part of his team that is getting much of the attention, and one adviser in particular – Dennis Ross, Bill Clinton’s Mideast envoy whose record includes supporting the pro-Iraq War advocacy campaigns of the Project for the New American Century and serving as a consultant to the Washington Institute for Near East Policy (WINEP), a bastion of Israel-centric policy thinking in Washington.

i’m sorry, i won’t be voting for obama
from gnn: It pains me to say that I cannot vote with history. I will not be able to say to my children that I voted for the first Black president like many of you will. My vote is much too sacred to me to give to a man I cannot trust.

I will not be voting for Barack Obama or his opponent Republican John McCain. I frankly don’t know who I’ll be pulling the lever for.

History, hope and the buzzword ‘change,’ these are not reasons to vote for a president, especially not in a time such as now.

During his primary campaign Barack Obama claimed that he would listen to his supporters. He claimed that he would filibuster FISA (immunity for Wiretappers) and when the time came to fight, he didn’t even show up. This was his moment to win me over. This was his High Noon in the capitol rotunda, but in this feature Gary Cooper didn’t even show up.

At that moment, and many others throughout the campaign I saw Obama for who he was, just another frightened politician who when given a moment to show his true colors exposed himself to be yellow. I’m tired of these leaders, Democrat and Republican. They play on real people’s hopes and fears and use them for their own political ambition.

Obama has caught the moment, he’ll win tomorrow, probably by a landslide. Our hope for a great leader, I guess, is once again out-shined by the reality of “good-enough.” President Obama will continue the war in Afghanistan, continue NAFTA and CAFTA. All the while we will continue to kindly ask our dear great leader to listen to us. It will be a democracy, as we’ve had for decades, maybe a bit closer to our hopes but still mostly kept for our dreams.

from youtube: It’s not about left, right, conservatives, liberals, or any other manifestation of the false left-right paradigm, so often employed this election season. It’s about the New World Order and the blossoming of a police state under the “perfect master,” nothing more than window dressing for repression and dictatorship. Since Obama is a black man, and the nation is steeped in three decades of political correctness, it will be impossible to oppose him. Lest we do, we may very well face his “civilian national security force.” Fascism always looks pretty much the same, no matter the era or country.