selection ’08: will the sheep go back to sleep?

meet the new boss, same as the old boss

from paul joseph watson & alex jones: The messianic fervor which has preceded Barack Obama’s expected ascension to the White House has alarming implications for freedom and is a painful reminder that most Americans have once again been suckered into believing that the two-party monopoly offers any kind of solution to the crisis that we face... The messianic complex that has been attached to Obama is truly frightening. Bishops like Cornal Garnett Henning are calling Obama the new “Moses” while his supporters refer to him as "the black Jesus". In one You Tube clip, a woman hails Obama’s Godly powers by proclaiming that as soon as he is elected, all her problems will simply disappear, saying that Obama will help her personally almost like Jesus healed the sick and wounded. The election of a new president should not be a mindless act of idolatry and fanfare, it should be a solemn commitment to find a leader who will follow the Constitution. 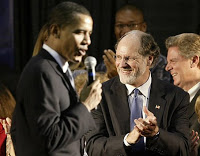 from nj star ledger: Gov. Jon Corzine, a multimillionaire and former Wall Street chief executive, is being actively vetted by the Obama transition team as a possible candidate for Treasury secretary in the new administration, two New Jersey Democrats familiar with the process said early this morning. As part of the vetting process, the transition team is reviewing Corzine's financial and personal documents, the sources said. The sources asked not to be identified because the vetting process is confidential. Neither Corzine nor his aides would respond to a request for comment.

from kurt nimmo: As an example of the sort of “change” we are likely to see now that Obama has won the presidency, consider the man he is likely to select to run the Department of Banker Giveaways, formerly known as the Treasury Department: Gov. Jon Corzine, the former chairman and CEO of Goldman Sachs and Bilderberg attendee. Corzine is on the “short list,” along with former Clintonites Lawrence Summers and Robert Rubin. Summers is a Bilderberg and Council on Foreign Relations member and Robert Rubin, director and senior counselor of Citigroup, was the fifth chairman of the Council on Foreign Relations and a Bilderberg Society member. 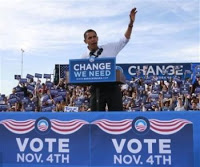 from steve watson: In an incredulous display of ignorance symptomatic of the underlying causes of the financial crisis, CNBC anchors laughed their way through an interview with respected economist Peter Schiff yesterday as he attempted to explain how an Obama presidency would negatively impact the U.S. economy... Schiff then had to explain once more that he was not endorsing McCain by criticizing Obama, much to the confusion of the anchors who clearly struggled to stretch their imaginations beyond a right-left political paradigm... Perhaps if more people had listened to voices like his several years ago, instead of laughing at them, which as we have seen is still the case, then the economy would not be in such a dire mess today and we may have a presidential candidate who speaks of enacting change and actually means it. Instead, the so called free world is today lumbered with a choice of endorsing a phony messiah or a dead duck, both representative of the fortified and eradicable Washington elite punch and judy show.

will obama 'change' the bush police state or expand it?
from paul joseph watson: Now that Barack Obama has become the 44th President of the United States we offer a challenge - will those who elected him be able to progress past their fawning idolatry and actually pressure Obama to deliver on his mandate of “change,” or will the architecture of the Bush police state remain in place while the American empire expands? Obama’s acceptance speech assertion that “change has come to America” is likely to signal the beginning and end of the “change” that millions of Americans naively thought they were voting for. That’s it folks, the puppet has been rotated. Sorry to be so cynical, but the “change” you thought you were electing is already over and done with. The color of his skin matters about as much as whether he has an R or a D next to his name. The egregious spending will continue, government will balloon in size, American soldiers will be used as cannon fodder for more interventionist wars of the military-industrial complex, U.S. citizens will continue to have their phone calls tapped and their rights curtailed, and the Federal Reserve will continue to rule the financial system with an iron fist while the middle class is squeezed out of existence.