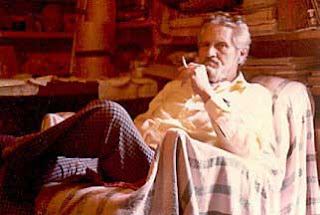 Richard Sharpe Shaver, writer and artist, created enough excitement in the heady days of paranormal phenomena and UFOs it's known as "The Shaver Mystery". Shaver wrote a letter to Amazing Stories magazine in 1943 with details of an ancient alphabet called Mantong. Ray Palmer, editor, published the letter to mark the beginning of a period of more than five years from 1943-1949, where Shaveriana produced stories and controversy. Palmer requested more from Shaver and resulted in a heavily edited book in 1944, which can be read in a free .pdf, "I Remember Lemuria". Shaver related memories and time living under the Earth's surface in a honeycombed world of caverns among deros and teros.

Deros and teros are abandoned survivors from an advanced civilization that fled Earth around 40th century BCE. The Sun's radioactivity was slowly killing the race known as Titan-Atlans. Deros are a shrunken group of evil dwarfs, who are insane, due to insufficient Vitamin D and radiation exposure. Teros are another group who survived but maintained health. Deros are a threat to surface dwellers and Shaver believed killed, both, his brother and wife. Teros try to help those on the surface.

Tim Swartz provides an excellent synopsis of the mystery in, "Richard Shaver's Inner Earth Mysteries". You can hear Palmer and Shaver on the Long John Nebel radio show from WOR, New York, circa 1958, here. You can see Palmer in a 1977 interview, which marked the 30th anniversary of UFO sighting by pilot Kenneth Arnold, whose account Palmer published in the first issue of Fate magazine. Shaver studied art and married his instructor, his "Visions of a Subterranean World," by Doug Skinner is a summary of Shaver's art and acceptance in the genre of outsider art.

Richard Sharpe Shaver is largely dismissed and forgotten, but there is just enough in his stories to leave a reader's mind with question marks. Shaver spent time in mental hospitals and suffered schizophrenia and depression. Palmer, whose stunted growth left him only four feet tall, found a home in science fiction for most of his life. These two outsiders helped create the science fiction market. Shaver would object to calling it fiction, however!