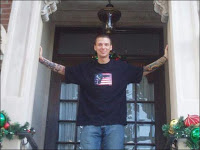 from washington times: A former employee at a Chicago psychiatric treatment center said Kazmierczak had been placed there after high school by his parents. He used to cut himself and had resisted taking his medications, she said. Kazmierczak spent more than a year at the Thresholds-Mary Hill House in the late 1990s, former house manager Louise Gbadamashi told the Associated Press.

russia: US spy sat shot is ‘a cover’ 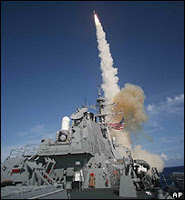 from bbc: Russia has accused the US of using a plan to shoot down a broken spy satellite as a cover for testing an anti-satellite weapon… “Speculations about the danger of the satellite hide preparations for the classical testing of an anti-satellite weapon,” a statement reported by Itar-Tass news agency said. “Such testing essentially means the creation of a new type of strategic weapons,” it added.

newborn dies while in custody of homeland stupidity

from ap: American Samoa’s delegate to the U.S. Congress is calling for an investigation into the death of a baby at Honolulu International Airport. Delegate Eni Faleomavaega has asked the Department of Homeland Security to begin an investigation into death of 14-day-old Michael Tony Futi last Friday. The baby had been flown to Honolulu for emergency heart surgery. He died while detained inside a customs’ room at the Honolulu airport with his mother and a nurse. A lawyer for the family announced plans to sue the federal government over the baby’s death. Faleomavaega called for the probe in a letter issued to Homeland Security chief Michael Chertoff.

from press tv: An anti al-Qaeda group in central Iraq has resigned en-masse from its US military employers, accusing them of killing 19 of the group… “The group, which comprises 110 members, resigned in protest at organized assassinations by the coalition forces,” Sabah al-Janabi, leader of the anti al-Qaeda Awakening group in the area told AFP.

buffet sees healthy future in drugs firms
from guardian: Warren Buffett, the billionaire investor, has given a stamp of approval to the healthcare sector by taking small stakes in big pharmaceutical companies, including GlaxoSmithKline. The billionaire’s holding company, Berkshire Hathaway, declared in a filing in the US yesterday that it had bought 1.5m shares in GlaxoSmithKline in the form of American depositary receipts (ADRs) for $76m (£39m)…

from danger room: I know, I know. You’ve been worried. Sure, Blackwater is up to its mercenary neck in Iraq. They’re protecting missile interceptors in Japan, and rescuing blondes in Kenya. And let’s not forget about their fine work in New Orleans. But how, you’re asking, is Blackwater going to get involved what many think is the great struggle of the 21st Century – the upcoming war against China? Well, never fear. Blackwater has got that struggle covered, too. Defense News reports that “Blackwater is training members of the Taiwanese National Security Bureau’s (NSB’s) special protection service, which guards the president.

protests over beijing games ‘will grow’

from guardian: For six years, the organisers of the Beijing Olympics have been planning an event that will restore China to the centre of the world stage… But with less than six months to go, this celebration of Chinese resurgence is threatening to degenerate into an opportunity for critics to land some blows on the communist leadership.

video: US navy sonar vs the whales
from raw replay: US navy is trying to protect whales from the navy’s super sonar. The following video is from CNN’s The Situation Room, broadcast on February 15, 2008.

flashback: navy must cut sonar use off california