Silence Of The Lambs In America 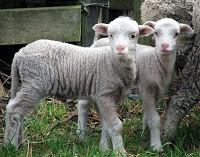 Douglas J. Hagmann clearly depicts our present historical dilemma in excellent article, “Silence of the Lambs in America.” Readers willing to face facts, will find, no finer statement of our perilous situation. Hagmann reminds, if the reader has missed recent headlines, about the erosion of our lives in almost every way, “…of unbridled government overreach into our lives, from
much-publicized gun control laws, warrantless searches and seizures, to
the perverse and absurdly shameful degradation of our human dignity at
the hands of the TSA and the DHS.” The present writer sees our managed collapse as a result of a long-term elite agenda. Hagmann observes how our American circumstances parallel what occurred in Nazi Germany:

“Sadly, most high-profile Americans claiming to possess intellectual honesty and moral integrity (particularly those with a microphone or keyboard and an audience of significance) seem to lack the corresponding desire and courage to point out the disturbing similarities between the state of Hitler’s Germany and present-day America. And there are many such parallels. The precious few who do point them out are the victims of a relentlessly vicious campaign of character marginalization…”

The present writer can only agree how Amerika with its Fatherland Security resembles Nazi Germany.  Readers should wake up to face our managed fate and that it’s happened before in history!

The present article includes silence of Christians and any moral person as acquiesing in their own fates. Hagmann poses to us most important existential question of all:

“The ultimate test of a moral society is the kind of world that it leaves to its children. What are we going to tell our children and grandchildren about what we’ve done to stop the metastasis of tyranny?”

What are we going to do?