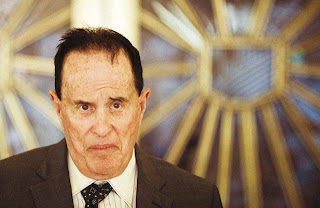 Kenneth Anger and the Sordid Secrets of ‘Babylon’

from vice.com: A few days before I was set to interview Kenneth Anger, I started feeling weird. I kept imagining a terrible scene: sitting across from the 85-year-old filmmaker in a dimly lit, very old room while he grows increasingly frustrated with my line of questioning. And while I don’t believe in such things, I began worrying that if I annoyed him enough he’d cast a Thelemic curse on me. He’s done it before. Whether or not I’ve been doomed is still unclear, but regardless, I got what I came for. I wanted to speak with Kenneth because, as I see it, he has transfigured the Hollywood aesthetic into some of the most emblematic and striking short films ever made. Much of his work — especially Rabbit’s Moon, Scorpio Rising, Kustom Kar Kommandos, Lucifer Rising, and Mouse Heaven — runs along a twisted continuum of American iconography, societal norms, and belief. Kenneth also wrote Hollywood Babylon and Hollywood Babylon II, books that detailed hushed celebrity scandals from the silent-film era through the late 60s. Some critics have cast doubt on claims made in the book, but who are they to say they know better? They weren’t there. And before the existence of societal scourges like People, TMZ, and US Weekly, it was much easier for famous people to get away with sordid deeds. Six years after its initial publication in France, the book was released in the US in 1965. Within days it was banned and pulled from bookstores until a new edition was printed in 1975.