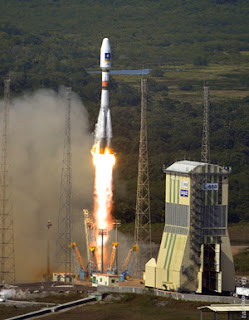 The article reports: "The pair of Galileo satellites was carried side-by-side on a dual-payload dispenser system, with their release performed in opposite directions by a pyrotechnic separation system that released them at the proper orbital insertion point. These spacecraft joined the initial two Galileo spacecraft orbited on Arianespace’s milestone VS01 flight on October 21, 2011 – which marked Soyuz’ introduction at the Spaceport. Together, the four satellites launched by Arianespace will form an operational mini-constellation – creating the minimum number required to allow navigational fixes for validations of the Galileo system...Galileo is a European initiative, with the constellation of navigation spacecraft being developed in a collaborative effort of the European Union and the European Space Agency."

You can read more about Galileo Navigation at ESA website. It seems, certainly, a very aggressive launch schedule with 22 more navigation satellites scheduled to be put into orbit, beginning next year.

You can enjoy replay of third Soyuz mission launch below!