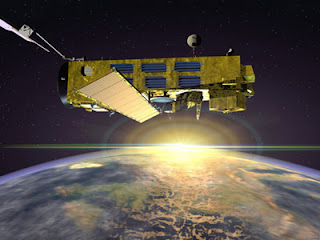 We may look to regions beyond our atmosphere for the next "New Deal of the Space Age"? It would not be a government project but perhaps the next growth industry? How many can be employed cleaning hundreds of thousands of near Earth space objects and space debris? Or, will a fascist New World Order simply rocket prisoners into space without proper safety precautions to perform the task? Will it be the case space tourists peer out cabin windows to view manual trash collectors of celestial highways at work? Is there perhaps more behind this issue like a hidden agenda?

Is it all tin foil hat paranoia or simply a case of asking questions? There is concern about the huge eight ton ESA Envisat (Environmental Satellite pictured) when it is discarded in 2013. It is not beyond imagination, taxpayers could be asked to shoulder costs of environmental programs to sweep near Earth space free of debris by using space-based laser platforms. There will be another layer of cover to keep knowledge of space weapons platforms hidden. In "Near Space Environment," Cecilia Colome informs readers this is not a new idea:

"As early as the 1970s NASA began to investigate the feasibility of forcing space junk into the Earth's atmosphere, where remnants not destroyed by re-entry would fall to the ground. The central idea of this project, known as Orion, was to focus a high-powered laser beam into individual debris fragments, causing their outer layers to vaporize, and creating a thrust that would deflect their orbits. The research for the Orion project demonstrated that the clean-up would be extremely expensive, mainly because of the high power required by the laser and the high cost of the adaptive optics necessary to focus energy into small objects at great distances from the ground. This idea still might serve for the future, when technology may be able to equip satellites with the high-powered lasers and enable them to "sweep" space debris into the Earth's atmosphere."

Is it not possible our next big civilian space program will be celestial highways cleanup crews? The incredible costs of putting crews into orbit a cover for money transferred to black programs? The present writer isn't taking himself too seriously and sees the humor behind his suppositions, so please enjoy Rhett and Link's "Space Junk Song"! There's also a hilarious "trying not to die" alternate ending available here.

On the other hand, hidden agendas are not entirely dismissed. A top ten of near earth objects can be viewed here. NASA devotes an entire program to track near earth objects. A weaponization of space warning repeated by Werhner Von Braun, covered in a previous post, should be taken seriously. You may view a past post, space junk: vanguard 1, to learn more about the issue.