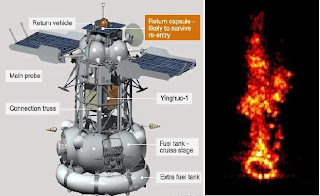 Russia's failed Phobos Grunt Mars space probe (German infrared image, right), will soon burn up upon reentry. BBC article reports, "Russia's failed Mars probe, Phobos-Grunt, is about to fall back to Earth - quite probably on Sunday. The spacecraft has been losing altitude rapidly in recent days and will soon be pulled into the top of the atmosphere where it will be destroyed."  The Russian satellite makes third high profile reentry in past four months! Phobos Grunt follows the US UARS in September and Space Junk #3 covered German ROSAT reentry in October.  Chicken Little may have been right, "the sky is falling."