space shuttle atlantis touches down, ending an era of adventure in space 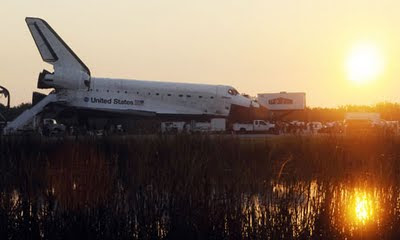 from guardian: She roared into the heavens a fortnight ago atop a column of fire, enthralling a million spectators as she set off on her final voyage. But the space shuttle Atlantis slipped quietly back to port on Thursday at the end of her five-million-mile journey, gently lowering the curtain on three extraordinary decades of adventure in human space flight.

NASA's space shuttle era officially came to a close at 5.57am (10.57am BST) when the orbiter and its crew of four astronauts touched down at a remote runway in the northern reaches of Florida's Kennedy Space Centre in Florida, watched by a few hundred space agency workers and reporters who turned out before dawn to witness a moment of history.

Like a ship's bell ringing a vessel safely back home, two deafening sonic booms pierced the Florida sky to signal Atlantis's otherwise silent arrival, and the last few seconds of the 135th and final mission since the first launch of Columbia in April 1981.

It was day of celebration and raw emotion, with NASA employees openly weeping on the runway in front of the newly retired shuttle, and Chris Ferguson, the Atlantis commander, paying a moving tribute to it and the rest of the spacecraft fleet. "The space shuttle has changed the way we view the world and it's changed the way we view our universe," he said moments after landing.

related updates:
Rejoice Comrades! Glorious Era of Soyuz Begins*
Race to the Moon Heats Up for Private Firms*
NASA says robots are key to future space exploration*
No Stranger To Spaceships, New Mexico Builds A Spaceport*
One Small Step for Man, One Giant Leap for Corporations*
Fabric From Flag Taken to Moon Is Sold for $45,000*
Fourth Pluto moon found*
Cape Doctor Says He’s Not Leading Survivalist Group And Has Been Harassed By Believers In ‘Planet X’*