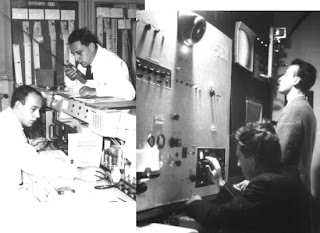 A memorial weekend italiano extraterrestre stravaganza provided for your pleasure! Let's go Space Truckin'. First, the amazing Judica Cordiglia brothers who tracked radio transmissions of early space missions. In the late fifties, Achille and Giovanni set up an amateur tracking station just outside Turin, Italy in a former convalescent home at a place they called Torre Bert. Soviet secrecy inspired the two to seek out their communications. Turin, in Northern Italy, made Soviets the program of choice, since launches in the Caucasus flew over them. The brothers soon realized the need for additional help to make their station work. Maria Theresa, a sister, learned Russian to become their interpreter. Giovanni's fiancee, Laura Furbatto, became organizer of a worldwide network of amateur tracking stations: the Zeus Network.

The Cordiglia brothers became local space experts that led to a invitation on The Fair of Dreams (Fiera dei Sogni), a quiz show. The brothers won and the winnings afforded a personal visit in 1964 to NASA, a dream fulfilled. The amateur space trackers successfully intercepted beeps of Sputnik 1, Explorer 1, heard the dog Laika's heartbeat during Sputnik 2 and John Glenn's Mercury Friendship 7 flight. The amateur space trackers' career culminated with the Apollo 11 moon landing on June,20, 1969. The brothers soon realized though, television had taken away the mystery and with it their hobby was "finito", ended.

Notoriety follows the Cordiglia brothers with allegations their purported recordings of lost cosmonauts are fake. A prior post on the topic is also available, "lost cosmonauts: airbrushed from memory." The recordings include an "SOS to the World" in Morse Code from a soviet spacecraft as it fades into outer space on November, 28, 1960. The labored breathing and heartbeat of an unconscious cosmonaut near death recorded February 2, 1961. A heartrending plea of a woman cosmonaut as she burns up on re-entry May 23, 1961. A good list of dead cosmonauts can be found here, which includes several early suborbital fatalities. The wikipedia entry for Lost Cosmonauts is a valuable resource.

"Space Hackers The Judica Brothers" is a recent documentary of the Cordiglia brothers and the Torre Bert enclave and a wonderful story! Soviets irritated by the brothers' monitoring, once threw an aspersion the two were "space gangsters". Don't miss it! While others are enjoying la dolce vita this weekend, you can get a really sweet story!