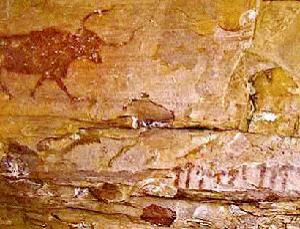 from toronto sun: Long before the modern hippy discovered them, magic mushrooms - hallucinogenic fungi - were used by ancient humans in religious ceremonies. Cave paintings discovered in Spain depict fungi with hallucinogenic properties in relation to religious rituals. According to a report in New Scientist, a row of 13 small mushroom-like objects in the painting also match the known size and shape of so-called magic mushrooms, called psilocybe hispanica. The report notes, however, that these are not the oldest representations of magic mushrooms used by people. A similar mural in Algeria dates the practice as far back as 9,000 years. Modern day hallucinogenic mushrooms are outlawed under many western countries' drug laws, but the 190 known species grow naturally in much of the world, and the Centre for Disease control rates the mushrooms as less toxic than Aspirin.