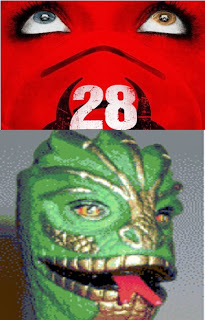 Springmeier: Feast of the Beast

Author and esoteric researcher, Fritz Springmeier convinced of its existence, reveals secret ritual "Feast Of The Beast."    Springmeier informs "... the Feast of the Beast is a yearlong event that occurs every 28 years and is attended by Illuminati leadership from around the world. It is a very high level ceremony...."  The matter proved important enough to communicate in writing as Springmeier adds, "a lot of pressure has come down on me, and I felt that I should go ahead and write this article rather than presume that I shall have the chance later."  Number '28' closely associated with secret ritual according to Springmeier, who turns to Aleister Crowley to reveal its significance:

"The Feast of the Beast is associated with the number 28 (as well as its reverse 82, and as well as the combination 7 times 4). One of the best books on providing the occult world’s meanings of numbers is Aleister Crowley’s books Gematria and Tables of Correspondences. On page 58 of Crowley’s Table of Correspondences under the Orders of Qliphoth, we’re informed that 28 is the number of the Beast, that is Bahimiron which is Bestial...In his book Gematria, about the numerology of mystic numbers, we are told that in the static universe 28 means power (Netzach, also spelled netsach), and in the world the magician makes it means 'My victory, my power.'"

Springmeier comments further on numerology fetish of occultists:  "There is no question that Cabalists view 28 as a very powerful number. Further, when we realize that 28 is also a combination of 7 (perfection) and 4 (also considered completeness or perfection), we can appreciate that 28 on a Magical calendar system is power- ful....The number 28 is said to come from Babylonian magic, the lunar calendar, and a woman’s menstrual cycle."


The grand appearance of Satan at the "Feast of the Beast," must be considered its top draw:

"At the Feast of the Beast, a beautiful bride is trained and presented to Satan, and she may well be a virgin. This ceremony is most likely held at a castle or palace, and is also likely to be held over in Europe for the principle ceremony. Lesser ceremonies may be held here in the states. Witnesses claim that Satan appears and interacts with his human leadership. He provides them with detailed instructions for what he wants done until the next Feast of the Beast. In other words, he provides the top Illuminati hierarchy with their future long-range plans. The actual Feast of the Beast is a yearlong ceremony."

"However, there is also a small ceremony performed before the autumn equinox approximately around the 5th to the 7th of September, which is a Marriage to the Beast ceremony, that can also be called The Feast of the Beast. It is a microcosm of the large ceremony. Or perhaps one could call it an imitation."

It does seem a ceremony counter to American fast-paced life. Springmeier shares a feast took place in 1982 and "...was the 13th from 1618, and that the Feast of the Beast in 1618 had been a significant event."  Readers are left to wonder what policy changes may have taken place in 2009 or 2010 as article written before that time, or for that matter,  significance of the 1618 feast?

Do you believe in reptiles?  Springmeier concludes description of "Feast of the Beast" ritual: "This has been a look at one of the most important secret Illuminati ceremonies, a ceremony based on Babylonian and Cabalistic Gematria, where important policy is planned, and having as its participants Satan (who appears as a man/shape shifting reptile) and the leadership of the Illuminati."