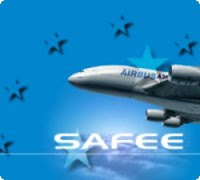 from threat level: A prototype surveillance system being tested by the European Union would place cameras inside the back of every passenger seat to track the facial expressions of travelers and catch would-be terrorists and unruly flyers on the brink of "air rage."

The Security of Aircraft in the Future European Environment, or SAFEE, project tested a prototype in January using cameras installed in a fake Airbus A380 fuselage. In addition to the seat cameras, the fuselage was outfitted with six wide-angle cameras to monitor activity in the aisles, such as someone running or lingering near the cockpit door.

According to a report in New Scientist, the cameras would look for passengers sweating profusely or behaving in a nervous manner, but it would alert the crew only after detecting a combination of signs, rather than a single one.

But an expert in camera surveillance told the publication he was skeptical that such a system would be able to successfully track a person's behavior as he moves around the cabin or as lighting conditions in the cabin change.