Spy Sat Blasts Off From Vandenberg Amid Mystery 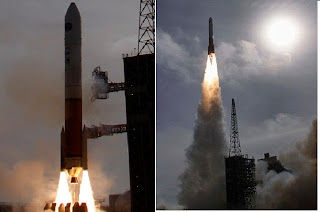 A NRO spy satellite, atop a Delta IV rocket with two strap on boosters for added thrust, launched from Vandenberg AFB, yesterday. Mail Online article reveals rocket thought to contain, "...some form of spy technology - thought to be a hi-tech replacement for America's aging fleet of radar satellites...Intelligence analysts think the rocket carried a radar imaging satellite capable of seeing at night and through bad weather." Charles Vick, space policy analyst with GlobalSecurity.org observed in article, "... the United States has worked to phase out its fleet of older, heavier radar reconnaissance satellites with smaller but equally capable ones," It is possibly a new generation of spy satellites going up, but yesterday's launch required additional thrust and a larger payload enclosure! The casual observer has even cause to wonder what's inside?