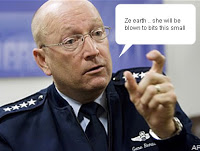 from usnews: When the Pentagon ordered a Navy ship to shoot down a crippled U.S. spy satellite last February, it claimed the operation was necessary to prevent a harmful fuel from being dispersed in the atmosphere. At the time, critics charged that the Bush administration was using the toxic fuel as an excuse to demonstrate missile-defense and antisatellite capabilities.

Now, there is new evidence that the critics were very likely right.

Astrophysicist Yousaf Butt obtained U.S. government documents showing that NASA's own analysis concluded that the satellite's fuel tank was expected to burn up completely during re-entry—even though NASA probably overestimated the tank's chances of survival. "Despite its optimistic oversimplifications, the released study indicates that the tank would certainly have demised high up in the atmosphere," Butt, a staff scientist at the Harvard-Smithsonian Center for Astrophysics, writes in an article for the Bulletin of Atomic Scientists.

Up to now, U.S. officials had refused to release any of the prelaunch analyses regarding the fuel tank, claiming they contained sensitive information. But Butt says that the newly released documents clearly contradict the official explanation for the shoot-down, which was seen at the time as provocative and risky.

from tom burghardt: You've heard of the FBI's "Quantico Circuit" and were outraged by illegal warrantless wiretapping by Bushist minions. To no avail, you flooded Congress with emails and phone calls, angered by the bipartisan "FISA Amendments Act of 2008" and the swell party thrown by AT&T for "Blue Dog" Democrats in Denver this week for the convention.

But just in time for a new administration (and the bundles of cash always at the ready for the expanding homeland security market), comes a complete "surveillance in a box" system called the Intelligence Platform!

According to New Scientist, German electronics giant Siemens has developed software allegedly capable of integrating "...tasks typically done by separate surveillance teams or machines, pooling data from sources such as telephone calls, email and internet activity, bank transactions and insurance records. It then sorts through this mountain of information using software that Siemens dubs 'intelligence modules'." New Scientist reports that the firm has sold the system to some 60 countries in Europe and Asia. Which countries? Well, Siemens won't say.

gore vidal: US never had democracy

from press tv: American essayist Gore Vidal says that despite the US claim that it is making the world safer by perpetuating democracy, the country never had any democracy.

In an exclusive interview with Press Tv correspondent, Vidal said that the United States has never had democracy and the word never was used in the US constitution, Bill of Rights or the Declaration of Independence.

Vidal also said that America has fallen into the hands of a small group of people that only care about global dominance and making money from US tax payers by waging wars.