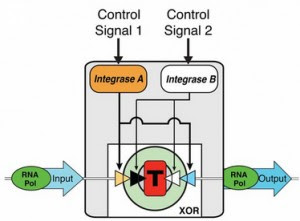 from extremetech.com: Bioengineers at Stanford University have created the first biological transistor made from genetic materials: DNA and RNA. Dubbed the “transcriptor,” this biological transistor is the final component required to build biological computers that operate inside living cells. We are now tantalizingly close to biological computers that can detect changes in a cell’s environment, store a record of that change in memory made of DNA, and then trigger some kind of response — say, commanding a cell to stop producing insulin, or to self-destruct if cancer is detected.

Stanford’s transcriptor is essentially the biological analog of the digital transistor. Where transistors control the flow of electricity, transcriptors control the flow of RNA polymerase as it travels along a strand of DNA. The transcriptors do this by using special combinations of enzymes (integrases) that control the RNA’s movement along the strand of DNA. “The choice of enzymes is important,” says Jerome Bonnet, who worked on the project. “We have been careful to select enzymes that function in bacteria, fungi, plants and animals, so that bio-computers can be engineered within a variety of organisms.”