Star Wreck: In The Pirkinning 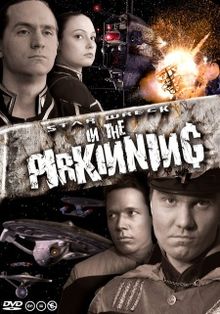 A highly entertaining low budget movie, Star Wreck: In the Pirkinning, is a surprise! Viewer expectations for a movie that parodies another are frankly low. SW succeeds, however, with cheap humor, a plot and computer graphics. You get the idea if you think of a Finnish Space Balls. The production saga makes for an interesting backdrop: "The 'prime mover' of the production was Samuli Torssonen. In the early 1990s, he produced short animated humorous Star Trek inspired fan films under the collective title Star Wreck. It was planned to be a fifteen-minute live-action special effects heavy film, containing the basic plot elements of In the Pirkinning: Pirk acquiring a ship and then a fleet, a quick transport to a Babylon 5-esque world, where the Trek-inspired P-fleet ships would have a huge battle with Babylon 5-inspired ships...For the next several years, to an outside observer, In the Pirkinning was continually 'almost finished, to be released within next six months'. Eventually, it took seven years from the first conception of the movie to its release, most of that time being taken by the huge time it took to render all the computer-generated imagery that formed all of the special effects as well as the virtual sets for all non-location scenes. For most part of the production, the studio was a converted two-room apartment: one room featured the blue screen and most of the computers and other equipment involved in the shooting, and the kitchen contained the render farm. A closet was used for dubbing."

You have to hand it to Torsonnen and director Timo Vuorensola for their ingenuity. The special effects and graphics are surprising! A viewer will be at home with humor that doesn't seem foreign. Hats off to Torsonnen and Vuorensola who pair again for another seven year effort to produce: Iron Sky. There is presently a fight for screen dates in the UK, and appears, distributors are caving to demand. This production team is a threat to the bigger players!