Stealth Tech: Pentagon Still At It – What Haven’t They Told Us? 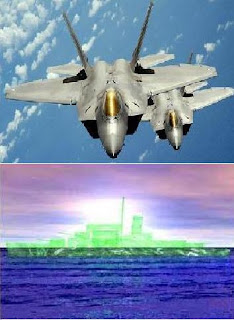 Univ. of Texas - Austin researchers claim proof in principle "...that so-called plasmonic meta-materials can achieve a cloaking effect," reports The Telegraph. Stealth tech is a given military pursuit with a long history. The tragedy suffered by the crew of USS Eldridge in 1943 was an experiment in "cloaking" gone horribly awry. A 5 min. video provides an excellent synopsis of the Philadelphia Experiment. World War II was still on and the eternal search for an edge brought unexpected results. The Philadelphia Experiment is often portrayed as either a hoax or a failure with a tragic loss of life. But according to Al Bielek, who jumped off the Eldridge's side in 1943, time travel was an outgrowth! You can read more about Bielek and his involvement in the Montauk Project here. What else haven't "they" told us about? 9/11 still defies explanation and reports of "Orbs and Missiles on 9/11" shouldn't be ignored! The Pentagon is still at it! What have they discovered? Is Al Bielek only a disinfo agent? There is likely more out there than you've been advised by the television set!